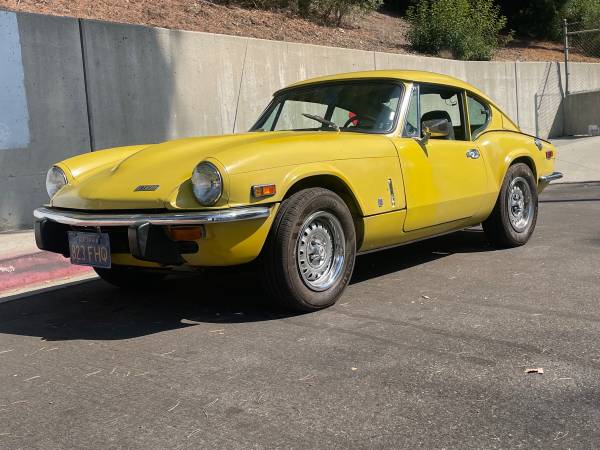 Found this British sports car in original yellow paint over black leather being offered for sale by its owner asking for $16,500, located in central LA. As shown here is the 3rd generation GT version of the Spitfire known as GT6 MKIII released in 1971.

No words about rebuilding or refurbishing, seems like the original example of the Triumph GT6 1971 MK3 is on the market today. Powered by a 2.0-liter inline-six mated to a four-speed manual transmission with 94000 miles shown by the odometer, it could be a perfect base to restore. 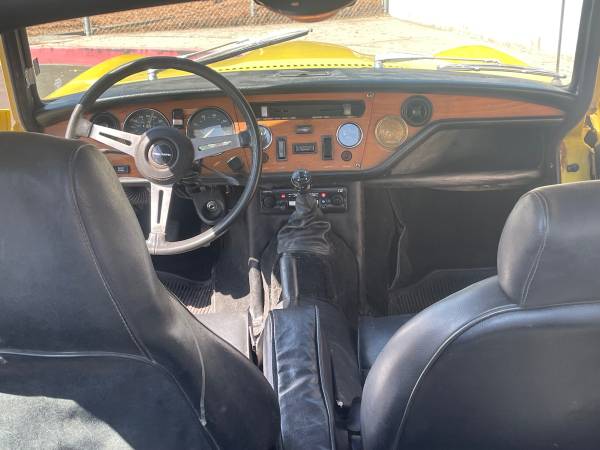 As you've seen here is a two-seater two-door fastback, with an original-rimmed steering wheel on wood-dash fronts, completely instrumentation consisting of a 160-mph speedometer, a tachometer, including a cassette stereo, and a radio. Overall the interior looks a good shape far from rotten or torn but needs a reupholstery job to be perfect. 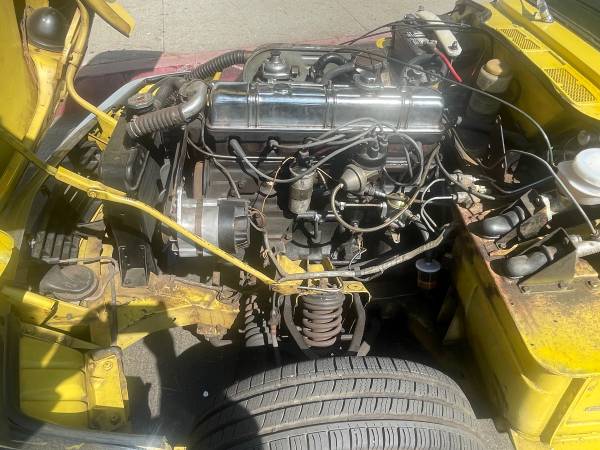 Very less info on the engine part, but it's a good angle view by photos, making it show well the engine detailed is a 2.0-liter inline-six claimed is run good and strong. Despite the fact, this is a non-runner, looks quite well cared for in its age. The engine side would be the main factor in what a wonderful survivor it appears to be. GT6s aren’t the most valuable British car you can buy, but this one looks perfect if you’re seeking a project that doesn’t have a lot of homework to sort out. 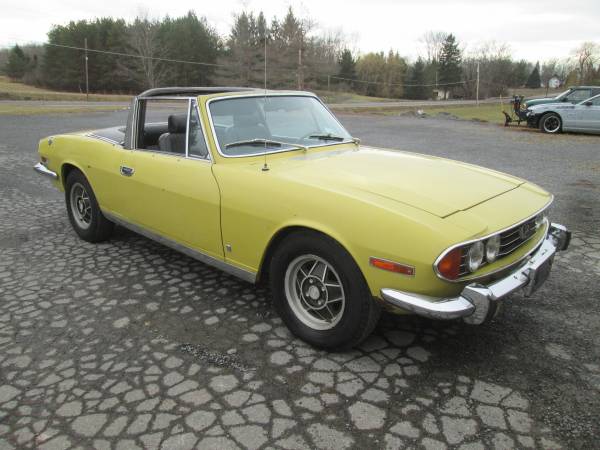 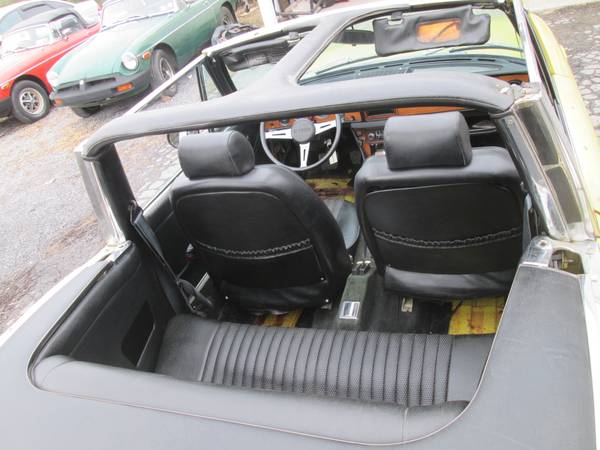 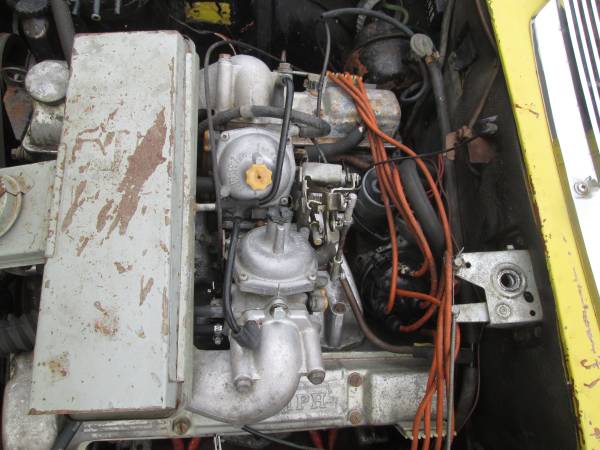 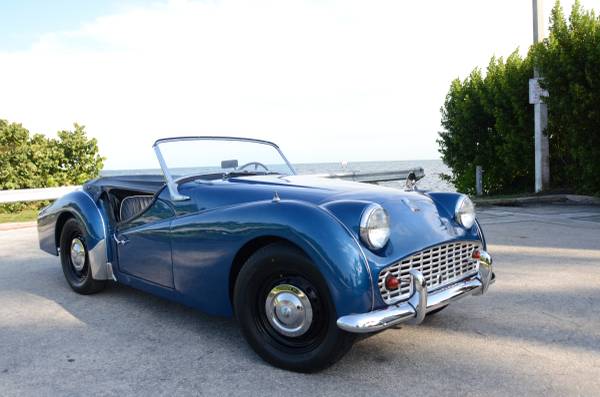 Here's we found this one the British roadster, was named the Triumph TR3 is a 2-seat sports car that was made by Standard Motor Company. As we've seen here is a TR3A model released in 1960 has been restored and rebuilt a couple year ago, only 24693 miles was driven since done or from new, not sure not in mentioned. More than 50 years the TR3A is one of the most competitive car in the Vintage and Production racing till today especially in the E-Production class of SCCA (Sports Car Club of America).

The car already posted in Craigslist about 22 days ago looking for $28900 located in Florida is said still in excellent condition it could be one of the remarkable Triumph TR3A sample today ready to grab. Need nothing to see it, please enjoy... 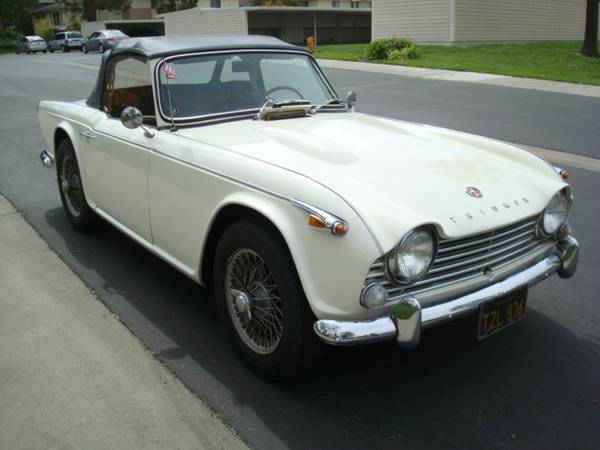 Here's we found a British classic roadster made by the Triumph Motor Company, it's a 2-seat sports car, fourth generation of the TR families also known as the Triumph TR4 and these an evolution version called the TR4A released in 1967, had many updated including a new chassis featuring independent rear suspension for more comfortable. A really nice classic car, claims is excellent condition, has 38K miles, frame is solid no rust or dent only for serious buyers.

The car already offered in Craigslist about 20 days ago, asking for $25000, location in Newport Beach, California. As we've seen here it could be an immaculate sample of the Triumph TR4 as its ages and condition, really perfect shape, interior and exterior looks awesome, hard to seen imperfections here. Not mentioned about restoration or rebuilt, uncleared engine photo, so you should ask directly to owner if seriously. Overall is really fun to kept it, especially like this condition. 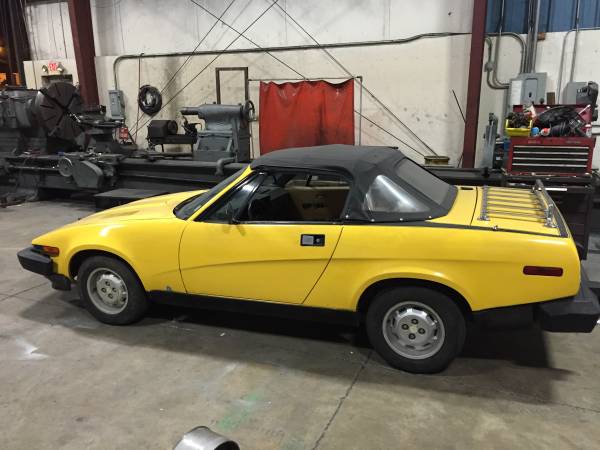 This the British sports car which are very salable in the US market, manufactured by the Triumph Motor Company. The UK launch was delayed at least twice because of high demand for the vehicle in the US. It's a Triumph TR7 was released in 2008 come in yellow 2-door roadster, runs, and drives new fuel tank, ready to go.