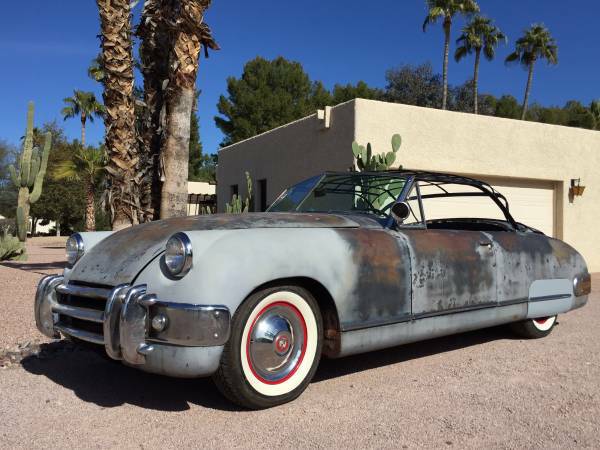 Here's we found this one unique luxury sports car, was made by a famous builder of Indy race cars, Frank Kurtis and manufactured in Chicago by Muntz, known as the "Muntz Jet" is early model year were released in 1951 perform as a fairly cool 2-door coupe with extended the body to make it a 4-seater, and has powered by a big Cadillac V8 engine mated with a Hydramatic automatic transmission. Is said only need 6 seconds from 0 to 50 mph and 125 mph for top speed, that's a seriously fast performers in its era.

Currently, this considered to be one highly collectible hand-built car in the US, is a rare car with low production numbers, most of the cars were sold to few rich buyers in Hollywood. Only about 400 cars was sold during 1951-1954, shortly thereafter, the Muntz company collapsed because of losses about $1000 on each Muntz Jet sold. And this a Muntz Jet number 143.

As we've seen here this could be a perfect start to restore overall. This 1951 Muntz Jet is a running, driving project that’s undergone quite a bit of work recently, including a rebuild floor, reupholstered front bucket seats and more. May about 65% has been done, not so far to be greats at least without talk the engine issue. Need a body expert for continuing work at frame, such as removing few dings was shown here as well as repainted as finishing touch, and a fiberglass removable top in need of attention to finished. The original engine was swapped by previous owner with a younger 1957 Lincoln 368 C.I. engine and was mated with its original G.M. Hydra Matic.