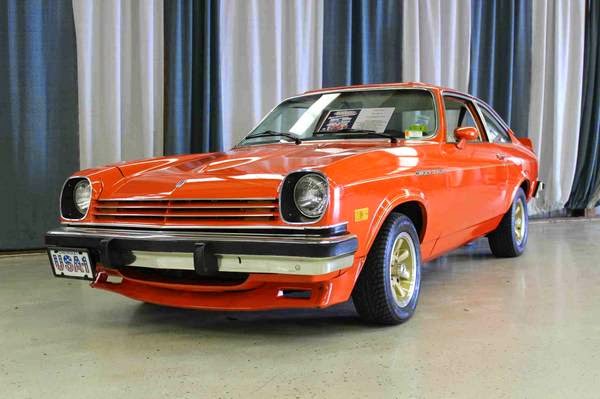 Here's we found a rare American classic muscle car by Chevrolet, it's a 1976 Chevrolet Cosworth Vega limited-production version of the Vega, with higher performance, only 3,508 cars ever made and this one of them. Chevrolet developed the car's all-aluminum inline-four 122 cu in (1,999 cc) engine, and British company Cosworth Engineering designed the DOHC cylinder head. 5,000 engines were built.

Detail about this Vega by Owner
Cosworth Vega #3241 - one of 13 Cosworths chosen to be displayed inside the pavilion at the 2011 GM Nationals / CVOA Roundup.

This Cosworth was originally sold by Spence Chevrolet of Daytona Beach FL. The car was purchased from the 3rd owner in 2000 and was restored over the next 3 years. Some of the unique features of this Cosworth are the 5 speed transmission, front and rear spoilers (these were a dealer option), AM-FM 8-Track, and most notably, the factory sun roof. If you check the build sheet you will see that, at the factory, the car was shipped to Sky Trends Motor Home in Warren Michigan for the sun roof installation before being shipped to Daytona (also note, the "Sky Trends" decal in the driver side door jam). I was told when I bought the car that it had been stored inside for for most of its life, which was evident by the lack of any rust. As part of the restoration the following was done:

Body: Professionally repainted by Gales Body Shop of Deland. Gale used to work at Chevy dealer and was a big fan of the Cosworth. The paint job also involved removal of windshield and hatchback glass. The rusted battery tray was removed and the underlying metal replaced, then a NOS battery tray was installed. Chris Wheaton's replacement rear spoiler and front air dam was added and painted along with the respray. The sunroof faring was reattached where necessary. The passenger door was replaced from a donor car. No other dents were found. The body is bondo-free guaranteed. New door gaskets, hatchback gasket, and window felts were installed. CVOA stripe kit was installed as well as a new gas cap with 'Unleaded Fuel Only' decal. NOS front hood and rear emblems were replaced.

Underneath the car the, differential, control arms etc was resprayed flat back. New Kybe shocks were installed all around as well as all the rubber bushings in front end suspension. Custom exhaust system was fabricated by a local muffler shop(note: No Catalytic converter). Cross drilled rotors were installed on the front brakes along with new pads. The wheels were refinished by Wheel Medic and Falken 205/60 x13 on rear with 185/60x13 on front, chrome valve stems and caps. New lug nuts all around as well as NOS center caps. I was also able to find both front and rear NOS bumpers.

Interior: Everything removed. New padding sound deadener replaced as needed. New carpet from ACC was installed. All new plastic panels sprayed by Mark Rock using PPG process for coloring plastic. Headliner resprayed with proper color as was window sills. New door locks and window crank handles were installed along with NOS door latch escheons. New dome light, Hutton two-piece replacement dash bezel, RCA aftermarket stock looking AM/FM 8-Track installed along with stereo speaker that fits in standard speaker opening at top of dash. Passenger and driver seats were re-upholstered. Rear seat back top was replaced. The rear seats and backs along with the door panels were cleaned with bleach white. Rear carpeting was replaced. All documentation was framed and presented in the rear hatchback area for shows. Center console from a Chevy Moza was installed along with an NOS 5-speed shift knob. See the Chevy floor mats with gold lettering.

Engine: At the 2011 Roundup I blew a rod in the engine while autocrossing. So the engine is this car came from my original Cosworth #2474 that I bought from 2nd owner in 1980. When I bought the car it had 19K miles on it and was told by the seller that chevy had steel sleeved the engine. I drove the car as a daily driver while living in Maryland for 9 years and ended up with 56K miles when it was parked in 1990 after draining all the fluids. Over the next ten years that car was neglected and ended up too far gone to restore. However the engine was always very strong. This engine was installed in this car along with a rebuilt water pump from superior and the reindexed cams. The headers were ceramic coated by Jet Hot. The cam cover, brake reservoir, and Hutton Air Cleaner for weber carbs was powder coated cosworth gold. The hood gasket was replaced as was the wiring loom. Upper and lower radiator hoses and proper heater hose. Firewall was re-enforced and new clutch cable installed. New hood release cable was also installed. Summit Racing heat shield installed around steering column.

Last year the gas tank was cleaned and re-coated and new in-tank pump was installed, which later failed. Right now there is an external fuel pump located where the high pressure pump would normally be located. The weber carburetors were also rebuilt at that time as well.

The car is currently, as has always been stored in enclosed garage underneath a car cover. Owner start it up and let it run a few minutes on a monthly basis. This is too nice a car to not be out.