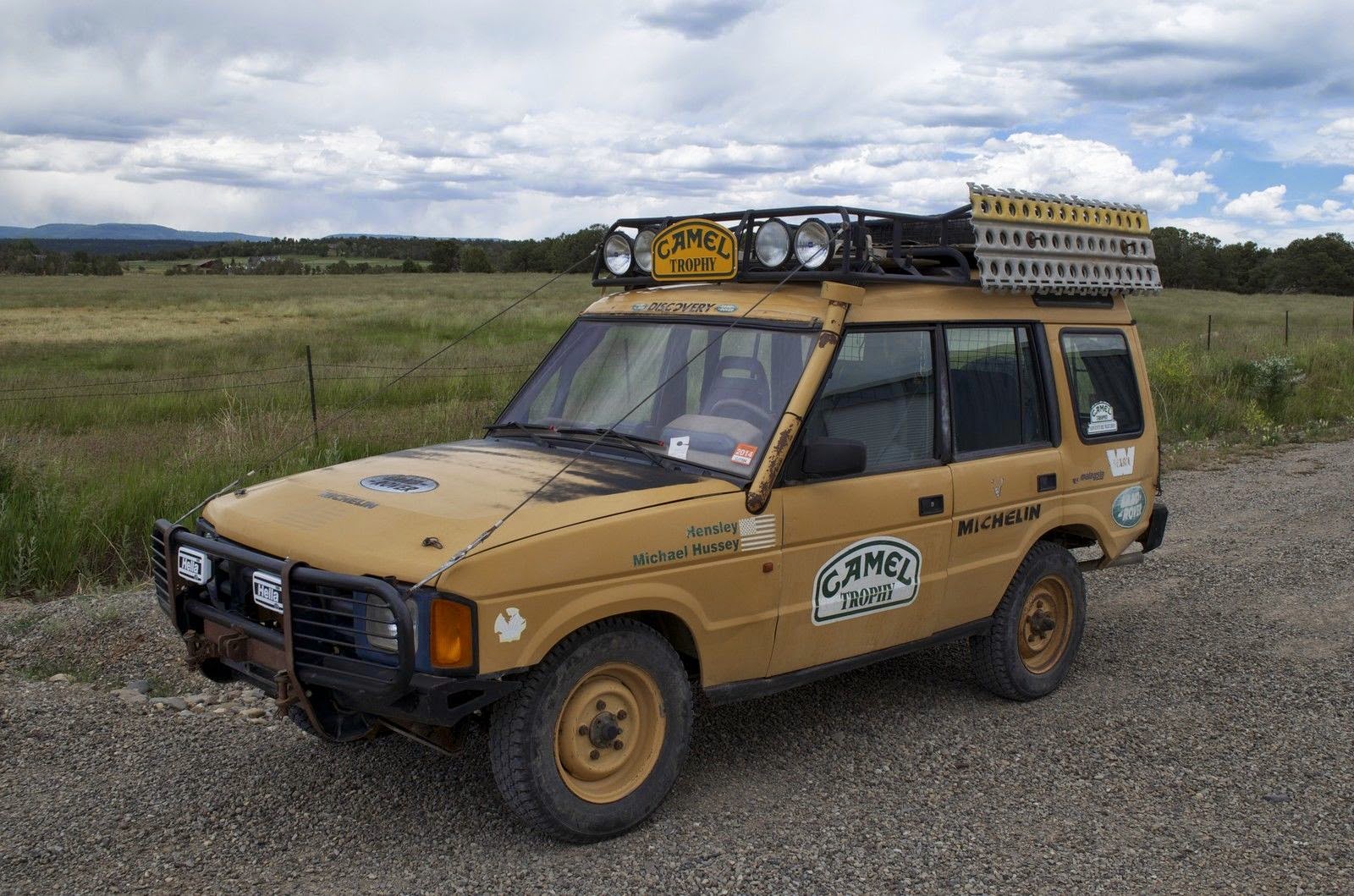 Here's we found the diesel camel ridden by American team in the Camel Trophy. It's a British offroad vehicle 1993 Land Rover Discovery, he has bears plenty of battle scars as a historic winner of the 1993 Camel Trophy, the only such event won by an American team.

Story about this Camel by Owner
It is a real Camel Trophy Disco, 200TDi and has been verified(by the Camel Trophy Owners Club, Heritage Documents, and ex-Camel Drivers)as the winning disco from Sabah/Malaysia, THE ONLY YEAR Team USA won the Camel Trophy, out of the 20 years it was held.  Soon after the 1993 race, It was given to Tom Collins(who had raced in the 87 Camel Trophy for Team USA and soon after became the track coordinator) as a gift from Land Rover of North America. The disco was being trailered to a New York auto show, when the truck that was trailering this disco, hit black ice and flipped. The discovery fell off the truck and the passenger side hit and slid...causing some cosmetic damage, broke the windshield/ 3 of the passenger side windows and slight upper structural damage(which can be fixed relatively easily with proper equipment).   After the crash, the truck was sold to Webb Arnold(who raced in the 91 camel trophy) in 1999, where he repaired it and used it as a training vehicle for team USA in whitewater colorado, until the demise of the Camel Trophy. I bought it from an older gentleman(named Bob) in the hills of Colorado, who obtained it from the brother of Webb Arnold, who "abandoned" it on Bob's property, for close to a year, to get some work done to it.  Bob had all the documentation, including bills of sales all the way to me from Land Rover Of North America in 1999, where it was sold as an offroad vehicle only and did not meet DOT.  Soon after my Purchase, I Called Webb to look for missing parts.  Soon after that, Webb tried to sue me for ownership, saying it was a stolen vehicle, not knowing his brother had "abandoned" it on someone's property to be "worked" on, yet gave All of the Documentation Known and Keys.  After months of litigation, Webb dropped the case and I AM STILL the rightful owner of the truck!  I also registered it as an off-road use vehicle in colorado.  I purchased a Heritage certificate and technical data sheet soon after.  From this document I have Matching numbers all the way around, axels, motor, etc.   It has 17,585km (roughly 10,650 original miles) on the working dash.  It had a caliper that had broken off, pinning a wheel, which I fixed.  I also checked/replaced the timing belt.  I also made it water tight buy cutting and fitting a piece of MR-10 Lexan sheet as the windshield, due to the windshield being busted when I bought it.  I also purchased 2 new Truck Batteries, as this truck uses duel Batteries to run the lights and winch.  Soon after, I tracked down 2 of the missing Hella 1000 fog lights, 2 of the missing Hella 1000 Driving Lights, 2 Hella 550 Driving lights, and Camel Trophy Plaques(remade by the original plaque makers).  I reinstalled them and everything works/looks great!  I have not tracked a winch down, but originally had a Husky 8500.  At some time, it was fitted with a Warn XD9000.  Interior is in decent shape.  The Roof Interior is rough and has been damaged.

This Discovery Comes with:

This Land Rover is not perfect and has damage.  But it is one of the most brutal off-roading machines around.  Not to mention the only winning Team USA Camel Trophy.
If you interested please visit link below
http://www.ebay.com/itm/271530751321?item=271530751321&pt=Race_Cars_Not_Street_Legal_