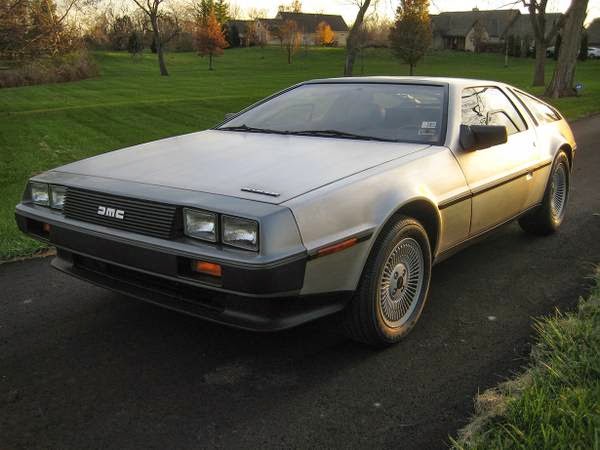 The American exotic sport car was made by John DeLorean's DeLorean Motor Company, it's a 2-seat sport car with gull-wing doors called DeLorean DMC-12. As the picture is a the end production of the DeLorean was released in 1983, the car became widely known as the time machine icon accordance with his role in the Back to the Future film trilogy. 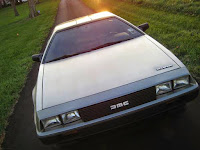 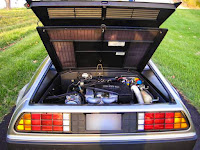 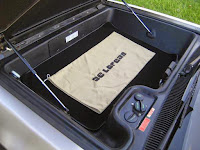 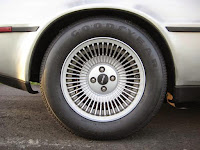 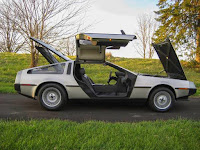 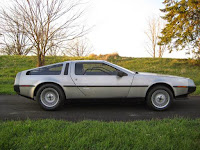 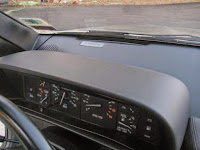 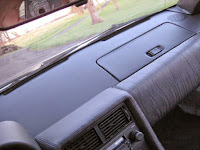 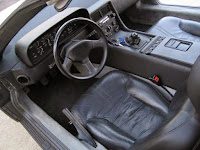 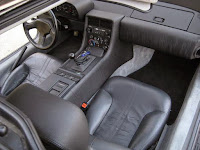 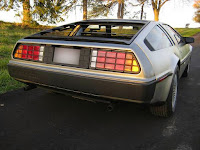 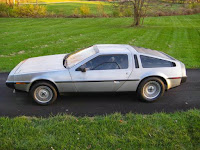 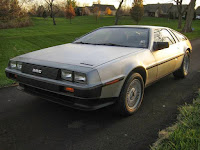 Detail by owner
I have owned various DeLoreans since the early 90's. (In retrospect I should probably give Delorean a great deal of credit for my illustrious career as a car builder.) I ate, slept and drank DMC for most of my life. Even drove one to college. Living in Columbus at the time made things even easier since the DMC parts warehouse and an education were right around the corner. After spending more time under them than in them, about 15 years ago I decided I was going to sell what I had and buy the best car I could find regardless of price. I looked for the car I'm selling now for nearly 2 years. I found a 2 owner car with 4K miles in a wealthy guys garage parked next to a Countach. Since then it has been kept in a Carcoon in my garage here in Columbus, on jackstands largely undriven.

Last year I decided to get after all the wear and tear stuff that deteriorates with age. Cut to 12K in parts later, I have another brand new DeLorean. I prefer to keep things as original as possible however certain pieces are either no longer available or shouldn't be used like the original clutch line that was nearly useless or the original style fuel pump and rubber boot. I also removed some of the factory undercoat to check the quality of the epoxy and it is perfect. Like shockingly perfect. All of the updates and recalls have been completed (although included, I left the throttle body cover off because this car is in no danger of ever becoming wet).

Starting at the front everything was inspected and if even remotely worn, replaced (and even some things that didn't need done on general principal); the entire fuel system (pump with upgraded sending unit, I cleaned the tank, replaced all rubber lines from tank to fuel distributor, replaced the fuel distributor, injectors, warm up regulator, fuel filter and evap canister). Replaced the headlights with Silverstars and all the turn/park/run lamps. Replaced the entire hydraulic clutch system (slave cylinder, master cylinder and braided stainless line), cleaned and lubricated the shift linkage. Upgraded the suspension with the Eibach springs/shock kit (which also places the car at the original European factory height rather than the odd US mandated monster truck altitude :), every fluid was replaced - including brake and clutch fluid with the correct Castrol GT LMA. I replaced the entire engine electrical system; cap, rotor, wires, coil, plugs (used the correct silver tipped AC Delco plugs), air filter, oil filter and I replaced ALL of the door/hood/engine hydraulic lifters. I also had the wheels re-balanced and steering aligned. I flushed the coolant, replaced the hoses and refiled the system with 50/50 mix and rust inhibitor. Flushed, re-oiled and recharged the AC and installed dye. Works insanely well but there's a slow leak. Obviously an O-ring but I'll need to wait for the weather to warm up before going after it (if you buy it before I fix it I'll lower the price so you can have it repaired wherever you are). It's still R12 and HAS NOT been converted. R12 is readily available just about anywhere but I can include enough to refill the system by your tech if needed.

All of the above service was completed less than 3 months ago.

The only thing left to repair is the headliner that has begun to sag slightly and there is a ding by the previous owner I never fixed. A PDR guy could get it out but I was afraid of having the grain get botched by messing with it. The grain on this is factory and, although minor, the risk of repair isn't worth the reward.

Still has the original tires. They are not cracked or rotted in ANY way. They're still perfect. I've put about 100 miles on them recently and they're brilliant. Why? My theory is that because the tires have not been dressed with any of that cheap silicone or tire cleaner/dressing that causes premature wicking, the rubber has retained it's wax and therefore it's pliability and structural integrity. All 4 tires were gone over with a a fine toothed comb inside and out and I would hop in this car and drive it to California without hesitation.

Also have some NOS parts like brake rotors and alternator voltage regulators, a metric ton of original dealer brochures and literature, the factory workshop manuals and every old worn item I replaced in case one day they become repairable.

Long and short; if you want one of the rarest, low mile, low owner, unmolested survivor DMC's with a ton of extras, price-be-damned OCD maintenance history by a master mechanic and Delorean lover - this is the car.

It's also one of the rarer and far more interesting. As you probably know, no 2 DeLoreans are the same as they made near constant improvements and changes as they were being built. This car is a late build, very well sorted (even the windows still work!) and the undercoating, while ugly, protected the chassis during shipment so well that if one were inclined to remove it they'd find a pristine frame beneath. The car has not been shown and I don't participate on the forums so if you buy it you'll be the first face it has in the community. Not often you can buy a rare car these days without the previous owner having tarnished it's reputation in a forum somewhere.

If it's still for sale this summer, if you interested please visit link below
http://columbus.craigslist.org/cto/4984373441.html