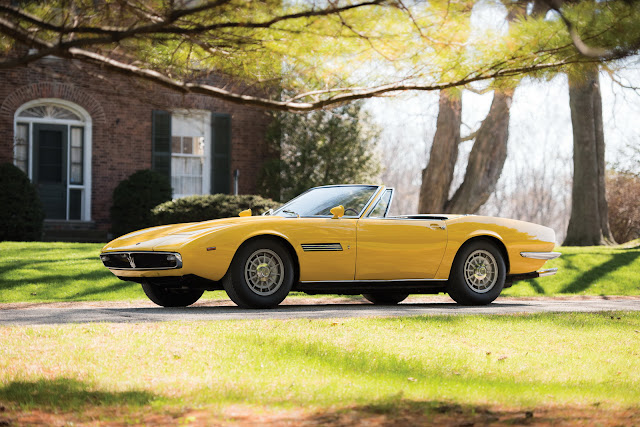 This original Maserati Ghibli Spyder, it a rare beautiful car you can't see very often passed on the road. She so simple and sweet, maybe you not recognize if she passes you, unless you are a car expert. It's about timeless, classy looks, beauty without having to draw attention, it so pure mesmerizing. As the picture is a first car of the first generation Maserati Ghibli Spyder was released in 1969 come in yellow designed by Giorgetto Giugiaro at Ghia ready to auction.

Detail about this car
The Ghibli became a highly desirable car not only for its beauty and performance, but for its rarity as well. It very rare car only 125 Spyders ever made, they come with front mid-mounted engine layout carries the 4.7-litre V8 four cam give off 330BHP, to able push the car from 0 to 100 km/h (62mph) in 6.8 seconds. Its superb handling characteristics, just as a luxurious grand tourer should be.

And this one of them, 1969 Maserati Ghibli Spyder with yellow marvel in excellent condition carries the AM115/S 1001 chassis number, which means it's the first Spyder ever produced. It was imported in the United States in 1975 and was driven for 41,000 miles, until 1986, before being “properly stored” for 29 years.

The Ghibli it number nine car on "Top Sports Cars of the 1960s" by American magazine. The car will auctioned by RM, in August.