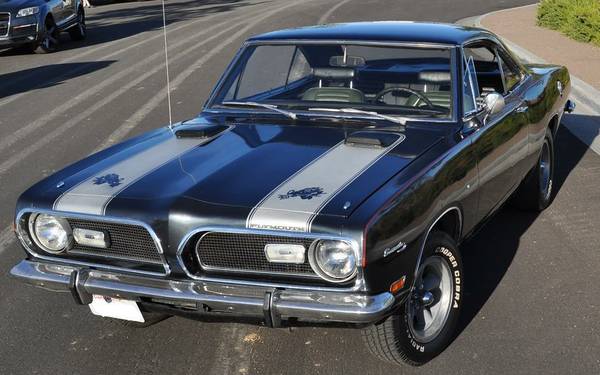 This American classic performance car offered by Plymouth, as the picture is a second generation of the Plymouth Barracuda released in 1969 it a rare variant come with the 'Cuda 440 Special Package, it the most fastest Barracudas ever produced. All matching and original condition nice opportunity to have it and keep it a greatness past rarely American muscle car.

Detail by owner
In 1969, Plymouth released the 340 & 383 'Cuda models to compete in the increasing market for performance and speed. The 'Cuda package was easily recognized by the two distinct twin black hood scoops atop matching hood stripes across the hood. The tape strips also appeared along the lower portion of the vehicle with corresponding call-outs revealing the engine displacement. The 'Cuda package was mainly developed for street racing, while the Formula "S" was for the driver who appreciated handling. The 'Cuda package shared all the suspension and drive train components found on the popular Formula "S" model, but lacked most high end options which were commonly found on Formula "S" optioned Barracudas. Plymouth offered the 1969 'Cuda with either the 340 rated at 275 hp or the 383 rated at 330hp. Although Plymouth had dropped the 383 in Barracudas for about three years at this point, it just wasn't enough. The solution? -- The 'Cuda 440 !

In perhaps the ultimate shoe-horn job of all time, Mopar shoved their 440 Magnum engine in the tiny A-Body Barracuda. This was also the first year of the high performance version of the Barracuda, officially called "'Cuda" by Plymouth. It is a name that stuck through the redesign during the 1970 model year, and has since become muscle car legend.

These cars were built in three different production "batches", with the first ones having a scheduled production date (SPD) of December 1st, 1968. The other two dates are March 2nd, 1969 and May 18th, 1969. There are primarily two special parts unique to these cars as well as the '69 440 Dodge Darts; they are the left side exhaust manifold casting number 3462017-1 and the unique left side motor mount. The driver's side manifold was required because the 440 was wider and taller than the 383 and thus pushed the 383 exhaust manifold into the steering column. The mount was a rather rough looking piece but was needed because the attachment bolt holes were different between the 383 and the 440.

The 440 'Cuda was offered strictly for straight-line performance, and due to the snug fit of the 440, left no room for power brakes, disc brakes, and power steering. The A-body 'Cuda series was only produced one year, making these some of the rarest and fastest Barracudas ever produced. The 'Cuda 440 Special Package, as it was called, was considered a factory race car and covered by a restricted 12 month/12,000 mile warranty. Customers were required to sign numerous releases and warranty papers to even take delivery of these beasts.
Enough history. . .now on to the car.

An extremely rare high performance notchback, and this one is a driver! One of about 40 440 'cuda notchbacks built, and one of about 22 known to still exist. Even fewer have survived with their numbers matching 440 V8, with a buildsheet and fender tag intact as well. The car has had a replacement 727 TorqueFlite transmission along the way, due to the previous transmission having a reverse valve body, and the 4th owner wanted a traditional shifting tranny, so he swapped it out with an earlier vintage, so there is no VIN pad on the trans. The 5th owner claims to have the numbers matching transmission, but efforts to verify this have not been fruitful to date.

This car is a bit of an anomaly. The fender tag has the car listed as and H code (383) with the E63 designation, but the dash VIN, radiator support, trunk support and the buildsheet all indicate an M code car with a matching last 6 of the VIN and correct order number of "920007". The Y39 "Special Order" helps to affirm the car was, in fact, an original M Code, along with the matching full VIN on the block. To my knowledge, this is one of a couple of cars in the registry that has this particular "factory error", though it does lend credence towards the idea that these cars started life as 383 cars with a 440 upgrade performed as cars moved down the line. This car is the third lowest order number in the registry, and has the C01 (Dec 1, 1968) SPD. The lower margin of the buildsheet does indicate "SPECIAL HANDLING CAR".

This car is a 1980's holdover, as it has retained its look since it was painted during the early 1980's shortly after purchase by the 4th known owner. The engine has been rebuilt by the same gentleman, and it is was bored .030 and has a Direct Connection cam installed, Edelbrock carb and Weiand single plane intake, as well as a 699 oilpan (incorrect) that has been extended for additional capacity. It has fenderwell headers (Hooker, all that was available during that era), but previous owners were wise to keep the original exhaust manifolds with the car, and the car has the correct (though sloppy from the factory) driver's side motor mount.

Standard upholstery needs to be replaced, as it was converted to black by the 3rd owner and showing its age. The green front seats are original, but the seat backs were switched by the upholstery outfit who just recovered over the tops with black.

Lots of research tracking down previous owners, and all are alive and well, and willing to discuss anything particular about the car.

Numbers Matching, strong running 440 V8. 489 Case and 8.75 rear with 3.55 Sure-Grip. Incorrect 26 radiator, though it does keep it cool in stop and go traffic in the heat. Incorrect dual point distributor. Solid compression across all cylinders. Recently bled the brakes, replaced the tank and sending unit with a Spectra piece, and rebuilt the Edelbrock carb (4618S carb would be correct on top of the correct manifold). Heads supposedly gone through by the previous owner, but there is no sign they have been milled by looking at where the intake and heads come together.

Car has some exterior rust, but was a factory undercoated car, so the underside and floors look remarkably good for a car this age. The areas that would need to be addressed during a restoration would be the following: Inner fenders (obviously), section of the lower rockers, sections of the rear quarters and wheel wells, small section of driver's side floor, passenger side floor where it meets the sill plate, lower rear quarters, trunklid, trunk extensions, and trunk floor. Also, there are sections where the vinyl top used to be that would likely need to be addressed as well.

This car is interesting because while the car has not been in a wreck and there are parts of the orginal F5 Limelite Green on the car, there are spots ALL over the car where B3 blue is peeking out from UNDERNEATH the factory spray. Interesting, to say the least; I think it lends credence to the fact they came down the line as 383s, but ended up with 440s during a time when they were sorting out the bugs on the line to make these cars happen.

Simply put, this is THE best candidate for a talented A-body restoration specialist to own and do a full, correct, concourse restoration. The best part is that the car can be driven as it sits until you decide to restore it the way it used to look! Recently driven 300+ mile round trip to Fall Fling Woodley Park, and the car had no issues, other than gas mileage!

Extensive history of previous owners. Simply put, one of the better documented and researched 1969 440 'cudas I have come across with extensive ownership history (and they are willing to discuss the car), and I know that I will spend a lifetime trying to find another car as rare and cool as this. I have priced it so that a true, rare, Mopar fanatic has the wiggle room to not end up totally upside down in a great, numbers matching car.

If you interested about this muscle, please visit link below
http://sandiego.craigslist.org/nsd/cto/5137573075.html