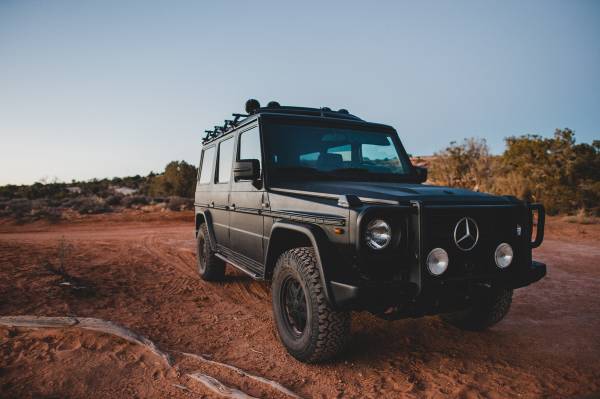 It's looks sturdy and stronger for a civilian vehicle, yes it is cool no doubt. As the picture is all terrain vehicle made by German automaker Mercedes-Benz in 1985 assembly at Graz, Austria, it's a 230GE G-Class commonly known as G-Wagen is a lineup of the Mercedes full-size luxury SUV. The G-Class is still in production and is one of the longest produced Mercedes-Benz automobile, with a span of 35 years. Only the Unimog surpasses it. If you interested please read details provide by its owner below.

Details by owner
Testing the waters, to see if anyone would be interested in buying our G-wagen. I love this truck, I've made some great memories with her and hoping the next owner will too. I've only had her for about a year and mostly used on road trips. Took her on a 3000 mile trip in the winter through Idaho, Utah, Neveda, California and Oregon. And a separate trip up to Banff and Calgary. That big gray box on top is a rooftop tent, it is not included but would highly recommend getting one if you're going to be doing any overlanding type trips.

I bought this car from Canada so the speedometer is in kilometers. The odometer doesn't work so I'm not sure what the exact mileage is. The previous owner put a lot of money into it upgrading small things here and there such as putting on LED taillights from the current model G500. He also had the car repainted in some sort of matte black liner thing which was great at first but now it's starting to chip/peel off in areas. It has front and rear mechanical lockers which work great. Great tires, brushguard, recaro plaid tan seats, black seat covers, aftermarket cd player and speakers, rubber floor mats from newer G500, fog lights and much more. All this car needs is some cosmetic work since there is a little bit of surface rust. But these cars are very rare and are only going up in value. And it's almost impossible to find one for under $35K that doesn't have rust. If it doesn't sell my next step would be to fix the rust, put on a new paint job and enjoy it for the next 20 years. Or someone else can take over and I'll move onto my next hobby (a sailboat or enduro motorcycle).

A few upgrades and such that I've done in the last year-
Front brake job, calipers rebuilt, rotors resurfaced, new brake pads, bled - $2150 (I have the paperwork)
New exhaust from the downpipe back, work done by Pro Exhaust in Auburn, comes with 5 year warranty on the exhaust - $1400
Alignment - $175
Replaced rear springs with brand new ones and labor - $620
New thermostat, belts, radiator flush - $260
New battery - $185

It's in great shape mechanically. Cosmetically it could use some work. That black paint/liner stuff is starting to peel off in some areas and doesn't look very good. There is some rust, in all the usual spots that these cars tend to have them in. But other than that the body is solid, no accidents or dings anywhere. If I decide to keep the car, my next step is to tackle the bodywork. I'm not in a hurry to sell, I'm not even sure if I want to sell but thought I would see if there was any interest. The only reason I'm considering selling is because I have 4 vehicles and nowhere to put them in our current living situation in Capitol Hill. Other than that it's an awesome truck that can take you everywhere. This is by no means a perfect restored truck, there is some work to do if you want to get it there.