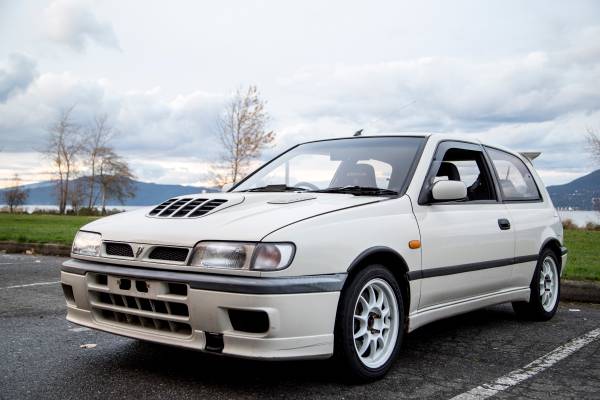 Here's hard to find is a rare car in US, 1991 Nissan Pulsar GTi-R three-door hatchback is a high performance of the Pulsar range was offered by the Japanese automaker Nissan which designed to compete with VW Gti, Subaru WRX and Mitsubishi EVO for Europe and Australia market. This was included in the homologation variant produced between 1990 and 1994 in order to enter the WRC under Group A rules at that time.

As we've see here all looks good and perfect, body frame, interior and engine looks correct had limited modifications. This all-wheel drive Pulsar is said to run and drive great with a turbocharged 2.0 liter engine mated with a manual transmission only need 5 second from 0 to 100 kph and a right-hand drive specs. That was being offered at Craigslist about 2 months ago location in Vancouver, British Columbia, Canada for $10500.

Details by owner
Be one of the few to own a WRC homologation rally car! Launched in 1990s, the 4WD Pulsar GTiR was aimed to be Nissan's WRC rocket. It was highly successful in the Group-N series, which allowed only limited modifications.

This means that the stock vehicles are almost identical to the winning Group-N race cars, with full interior.

However, this RA-model GTiR has been fitted with some important pieces to bring it closer to a tarmac-rally vehicle:

Plus other goodies. Basically, it costs more to buy the parts USED than to purchase the car itself.
This is one serious vehicle. Asking $10500 USD. Clean status, title in hand.