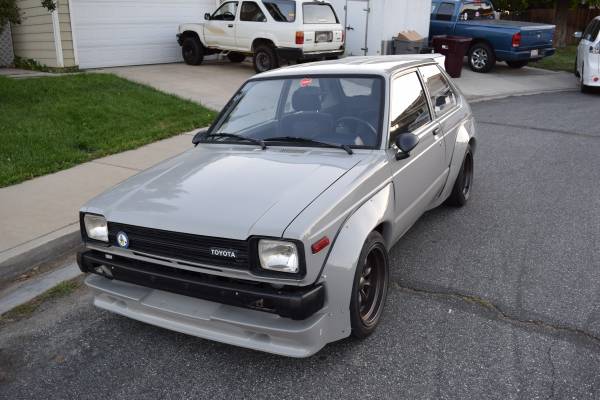 Here's a small car manufactured by Toyota, it's a second generation Toyota Starlet known as the 60 series released in 1981 perform as a 3-door hatchback had custom built. Original or tidy Starlet are becoming rarely and more difficult to find due, in part, to their age and proneness to rust, and due to the fact that many are being converted into track and rally cars, and are thus beginning to become a valuable collector's car. And this one of being converted but not sure, anyway it could be a unique small car in here especially as its look. The car already offered in Craigslist about 24 days ago looking for $6200 location in Beaumont, Texas.

The KP61 was mentioned on title, it mean the only Starlet type ever sold in the USA and carry a 1290 cc 4K engine only mated with five-speed manual transmission, it very famed about its reliability and low gas consume, unfortunately not photographs included. The exterior looks solid and dry come with custom body kit, seemed interesting no exaggeration. The interior looks cool as a young man toys may add a roll bar will raise its rank. The Starlet very popular in Europe and Asia.

Detail by Owner
I have a awesome 1981 Toyota starlet that I received as a trade, looking to sell to finish my corolla project. Has the n2 wide body kit, stock drivetrain, lowering springs, aftermarket wheels, Nardi steering with disconnect hub, jdm front seats, fiber class jdm bumpers, exhaust been replaced. This car drive awesome, I get a lot compliments. Asking $6200