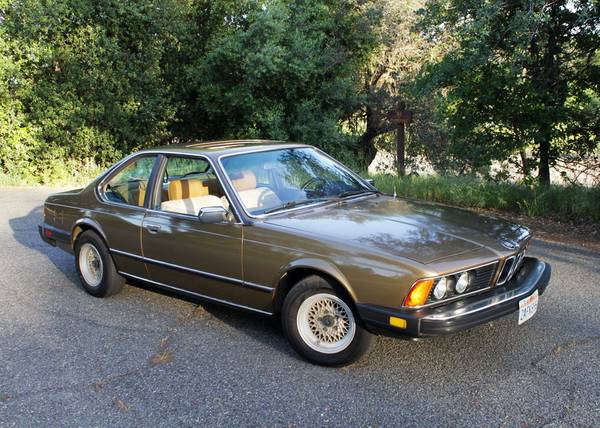 Here's found this one nice classic luxury grand tourer was made by Germany car manufacturer BMW (Bayerische Motoren Werke), commonly known as the BMW 6 Series and as we've seen here is coming from first generation families known as the E24 released in 1980 it's a 633csi coupe.

Described as a 133150 miles example in very good condition, the third owner says most of his life just sitting in the garage and rarely used, unfortunately no engine bay shots are provided. Already offered in Craigslist about 20 days ago looking for $6500 located in Woodland, California.

Details by owner
I am selling my 1980 BMW 633csi 4-speed manual with 133150 original miles. The car has a clean title and is in very good condition. It has been garaged and driven sparingly its whole life. I am selling the car because I have a more practical, newer car.

The car has a new battery. The alternator was replaced in 2011. the clutch was replaced at 110k. the oil pan gasket was replaced in early 2015. The cylinder head was compression tested in 2015 and has no problems. The radiator had a leak that was fixed in 2014. The differential has a small leak at the seal I was advised was a low priority in 2015. There are no other fluid leaks. Second gear will infrequently grind during spirited downshifting but does not grind under normal driving. The car does not have ac due to a bad hose between the compressor and the condenser. The timing chain has no problems. The bosch fuel injection system has no problems.

I have the original manuals, one wrench is missing from the complete toolkit. The car has no rust. The car is currently registered, smogged and will pass smog.

other notes:
the leather is in excellent condition under the included sheepskin seat covers
car cover included
door seals let in wind noise but do not leak
no rust
upgraded stereo, ADS speakers, sub and amp
aftermarket alarm
power accessories work except the rear windows can only be raised from rear switches, the power adjusting door mirrors don't work, and the trunk lid locks independently of the central locking system.
some cracked/warped interior plastic trim - this is visible in the picture of the open drivers door where the seat hardware is exposed and in the photo of the rear seats where the parcel shelf has a warped plastic cover. The plastic warping is very common on these BMWs. Otherwise very clean interior.
some paint fading on the hood.