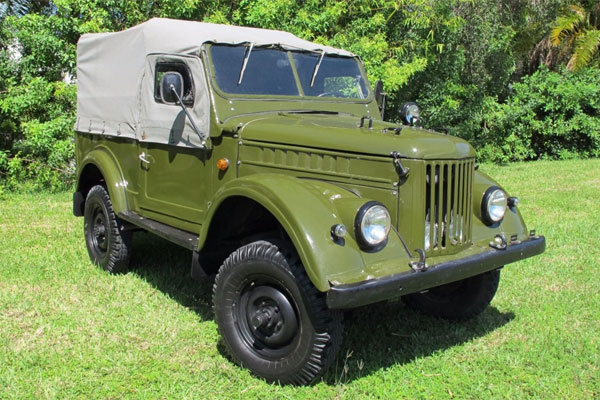 Here's a light all-terrain vehicle of Soviet Union flagship, it's a GAZ 69 originally was made by GAZ or Gorkovsky Avtomobilny Zavod for early production 1953-1955 period then forwarded by Ulyanovsky Avtomobilny Zavod known as UAZ for 1954-1972 periode. The GAZ 69 is very popular in the Soviet Union then become standard military jeeps of the Eastern Bloc and client states.

As you've seen here is one remarkable example of 1971 GAZ-69M very rare in US it was posted in Ebay looking for $14,500 located in Miami, Florida. Fairly cool 4x4 short wheelbase with soft top, powered by a 2.1L inline four and three-speed transmission has been driven about 8316 miles.

Detail by seller
For sale RARE 1971 GAZ-69M all terrain vehicle.

This legendary Soviet Army off-road vehicle were actively used in Vietnamese war, Arab-Israeli wars, in African wars, etc.
This Jeeps were used in armies of East Germany, Romania, Albania, Czechoslovakia, China, North Korea, and more, and more... And they were in civilian using too.
I read, GAZ-69s were supplied in 56 countries ( according to official data).

This well-maintained piece of Iron Curtain military history, one that should run and drive and serve as a great conversation starter.
She is in great cosmetic condition and mechanical shape. Incredible Survivor!

Only 8316 miles on a clock.
Military Green color with gray seats.
She had been in military conservation most of her life. 99,9% original.
No prior body damage. All gauges and switches works properly.
Vehicle was fully serviced with quality US oil and fluids. Carburetor was calibrated to US gasoline specs.
Powered by reliable inline four (41kW; 55 hp.) 2.1 l,(130 cu in) and 3+1 transmission. 4x4 and transfer case.

Now you have great and rare opportunity to own a part of Soviet Union history!

This vehicle was legally imported with all US Customs, EPA, DOT inspections and paperwork done.
Has clear Florida title and can be registered and insured anywhere in the US with no issues.