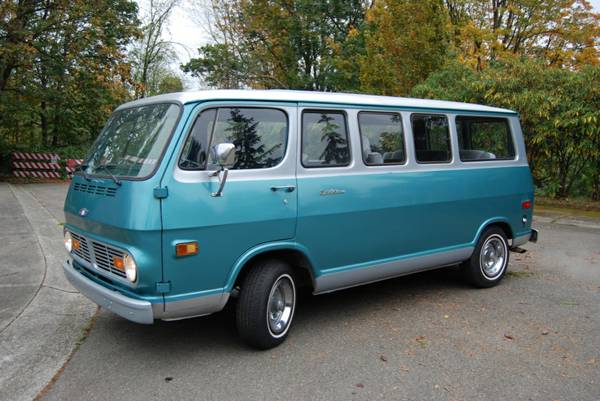 This American classic microbus made by Chevrolet to respond hegemony Volkswagen Bus in US market on that time, as you've seen here is a long wheelbase version of the second generation Sportvan family commonly known as 108 model, that was built in 1969 only 43000 miles on it, all looks great for age.

The van spent his whole life in Washington since new, that could be a remarkable example of the Chevrolet Sportvan 108 being offered for sale in Craigslist today, by its original owner. 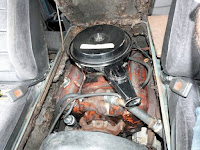 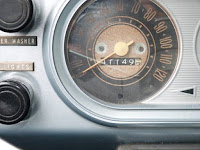 Details by owner
This van is one of only 2300 vehicles made in the last year's run of the model. ONLY A HANDFUL OF THESE REMAIN AND and it will be worth big $$$$$$$$ in years to come.

1969 Chevrolet SportVan 108
My van was first purchased at a dealership here in Washington state over 47 years ago and has been here in Washington ever since. I've owned it for over 25 years but the time has come and I need to sell the van.

EVERYTHING WORKS, NO ISSUES; works, drives, steers and will light the tires up from a dead stop. 43,000 miles on odometer, and assume it turned over.

I've searched the Net and car ad's for over a year and found exactly 1 van like this for sale. And it was a pile of junk advertised for $4500.

Designers of this van, took their styling cues from a cinder block, adding wheels, and 12 windows, and placed the engine between the seats.

I never restored it, but repainted it once, then maintained and kept in good working condition the most of it. It has a couple of small rust spots on one of the doors but all else is solid and rust free. Body has one dent and 2 spots of flaking paint but again nothing serious or requiring repainting entire vehicle.

Options are few but keep in mind the VIN has 9 numbers and compared to modern vehicles this has almost no options. All drivetrain is original to the vehicle and unchanged

90% of this van is original and unchanged and if you want a vehicle for restoration, it's a perfect vehicle to do it to. Engine uses a little oil, and transmission leaks a little, but nothing that is a problem. Think of it as an old dog that marks it spot after laying down

It's so rare, I can enter it in any car show and win the trophy because there are none like it.

I made some minor body tweaks when I repainted it some years ago, but nothing that can't be changed back if a restoration is done. Interior mods are the same, as I added the seating because the original seats were 2 slabs of foam wrapped in vinyl and were like sitting on, err. . . 2 slabs of foam, wrapped in vinyl !! Interior package has fold down bed, and captain's chairs on pedestals that allow full removal with a turn of latch.

This van was used a daily driver for years, and taken skiing, camping, scuba diving, hiking and still runs great, reliably and strong.