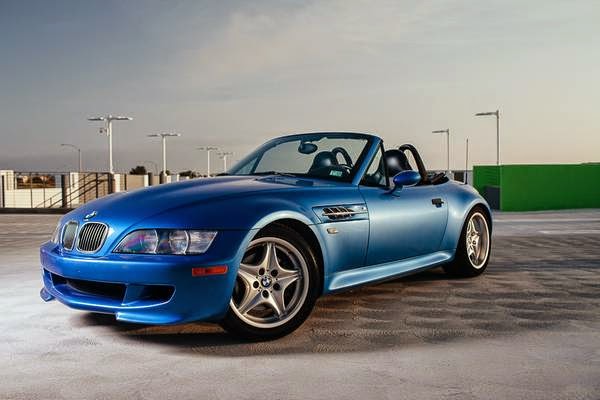 Here's we found Germany roadster by BMW with M spec edition built in 2000. It's a first generation of the BMW M Roadster, designed for performance version of the BMW Z3, and there were significant differences between the two variants. The body of the M Roadster had many slight differences. These included front and rear bumpers, gills, rear wings, boot and mirrors.

Detail about this Roadster by owner
Here it is, the M Roadster that will end your search for M Roadsters.

For your convincing, I present you three solid reasons as to why this M Roadster is the best one on the market right now:

Still not convinced? Well ok then, carry on reading.

It's a 2000 M Roadster (based on the Z3) with a 5-speed manual transmission in the lovely Estoril Blue with black interior. This is the last year the M Roadster was offered with the 3.2l S52 straight 6. Stock it puts out 240 hp, with this one probably running around 260 hp. The 1998-2000 S52 engine is typically considered a bit more reliable than the 315 hp S54 that appeared in the 2001-2002 M Roadsters (some people will debate that). It's certainly much cheaper to repair and maintain, and still scoots the car around very well.

This roadster has just under 60,000 miles on it, and is in excellent condition. All of the previous owners used it as a weekend runabout and took incredibly good care of it - the last one to a rather obsessive point. When I bought it in January of last year it was in immaculate condition and had just over 44,000 miles on it. Given that it was such an excellent example, I decided I would do my best to keep it as clean as possible, and followed the previous owner's guidelines (not storing it with the top down, using only Shell/Chevron/Mobil 91+ octane gas, frequent services, synthetic oil, etc. . .).

All of the usual (excellent) descriptors apply here: Clean title, never been crashed. Registered and smogged through March of next year. Zero bondo/repainting. Paint is in excellent condition except for a few pock marks and scuffing on the front bumper/lip spoiler. All wheels and tires look very good except for the left rear wheel, which has some road rash. The top is in good condition and shows some slight weathering but no rips, tears, or discoloration. The rear window is pretty scuffed and a bit faded. You can order an OEM window replacement for $285 and it zips out/zips in separately from the top. Seeing as how the only time I have the top up is when it's raining, it's never bothered me.

There are a few small scratches where the top meets the windshield from my garage clicker (you can't see them with sun visors flipped up), and the right window squeaks a bit on the way down (taking it in tomorrow to see if I can get it fixed). Other than that, everything in the car functions perfectly. AC and heater work very well, and I'm comfortable with the top down and windows up in everything from 45º F to 100º F. Interior is in excellent condition, with no tears in the leather or cracks in the plastic. Slight wear on the seats, but much less than typical for a nearly 15 year old car. The seats are still tight in their tracks, unlike many examples of the Z3/M Roadster.

The clutch is smooth and holds, brakes are excellent (although prone to squeaking if you don't wash it often), and the gearbox is direct with short throws. No slack in the steering. Everything is tight and like-new in driving feel.

The previous owner spruced up the performance end of things a bit with Koni Coilovers, a Shark Injector performance flash, and a K&N Air Intake. The Intake isn't isn't CARB-legal, so it won't pass smog. However, the original air box is included, and it takes me (a distinctly non-mechanically-inclined individual) two minutes to switch them out.

The stance on it is PERFECT (in my opinion). It sits about an inch lower than stock, so it's still drivable, but pretty mean looking. The handling is SHARP. When shopping for this guy, I went and drove numerous Mazda RX-8's, Honda S2000's, Scion FR-S's, stock M Roadsters, and M3's. This is sharper than all of them. It doesn't have the delicate precision of an S2000, but rather a direct, purposeful heft to it. It's very different feeling than any of the others - much more mechanical and raw. On a rutted highway at 80 mph it's a bit twitchy, but not dangerously so. On smooth roads it's a thing of beauty.

Being my daily for the past year, I've put in a few things to make the car more livable on the road. I added an Alpine X350S head unit (great iPod/iPhone connectivity) new top-of-the-line Infinity speakers and a Kenwood amp (the factory system was unbelievably terrible), as well as a hardwired bluetooth speaker phone adapter. With the windows up and the top down, I can use the bluetooth at 75 mph with no problem. There's a top liner which provides more insulation and sound deadening with the top up, and a sleek but removable wind deflector from Roadster Solutions which makes for a less windy highway drive.

All upgrades from both myself and the previous owner have been professionally installed. No sketchy home-wrenching here.

At 58,000 miles it got new tires. I had America's Tire put on four new Bridgestone Potenza run flats to the tune of $1200. The grip they give is incredible. Between those and the suspension, this little car will dig in through almost any corner. America's Tire includes a warranty on all tires and it's transferable to the new owner. With that noted, there's probably at least 39,000 miles and 95% tread left on all four tires.

Two weeks ago I took it in for its 60,000-mile service and had they replaced the thermostat and cooling fluid, installed a new fan clutch, replaced the radiator, hose, A/C belt, and drive belt, and replaced a faulty ignition coil. All of which cost a little over $1300.

Needless to say, this car needs nothing and is ready to roll. I have some receipts for service and the upgrades done. I also have the original tonneau cover, the Shark Injector chip, original air box, and factory stereo head unit.

So why sell such a fantastically excellent automobile? There's a 1972 BMW '02 down in San Diego that's calling my name, so it's time to move along and pass this beauty to its next caretaker.
Interested please visit link below
http://orangecounty.craigslist.org/cto/4465835565.html