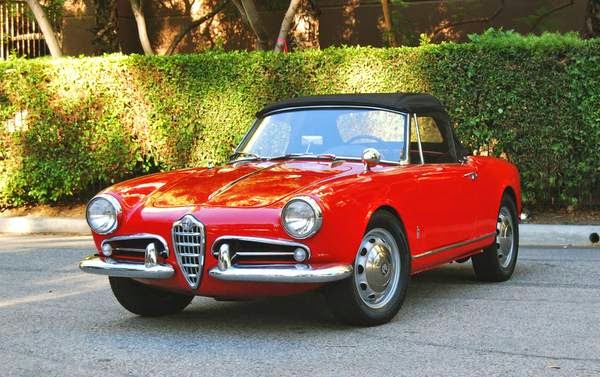 Italian beauty design by Pininfarina for Alfa Romeo, Assembly at San Giorgio Canavese, Italy in 1961. This a Giulietta Spider has fully restored and upgrade, it's has been excellent roadster today.

Detail about this roadster
1961 Alfa Romeo Giulietta Spider has fully restored an upgraded to 1600cc, 5-speed.

Alfa Romeo has long been known for their illustrious supercharged grand-prix cars of the 1930′s and 40′s. Even into the early 1950′s they were still very much considered an upscale acquisition for those seeking racing pedigree for the road. Success at the world's most prestigious race tracks, road races and endurance races has always upheld their high standard of performance and engineering. In 1954 the Giulietta was introduced to the world. Offered in various formats, it can be said the most stylish was that of the Pininfarina-designed Giulietta Spider when introduced in late 1955. The 101 Series, ranging from late 1959-1965 saw only 14,300 examples of the Giulietta Normale produced, with far less expected to have survived today.

The example on offer here, Chassis # AR149511857, according to Alfa Romeo Centro Documentazione was produced on September 15th, 1960, and sold new on April 5th 1961 in NYC, most likely by Max Hoffman. Factory records show that it was also produced in its current shade of Red. Early history beyond this is vague, but the car was believed to be in long-term ownership , and obviously used very little. By 2004 it was acquired by a Luigi Giordani of Snowmass, CO. Mr. Giordani reportedly spent $35K on a sympathetic restoration which included a total strip and repaint, new interior and top, new chrome, etc. At that time, Mr. Giordani opted for an upgrade to the powertrain by installing a 1600cc engine from a later Giulia, Engine # AR0011203056, mated to a 5-speed 'box. The increase in power and long legs of the 5th gear adds a fantastic dynamic to the drive of the Giulietta, enabling it to stay with modern day traffic with ease. By 2007, when the car passed to its most recent collector custodian in Washington, DC, the mileage was 52,013. The car then resided in a very large European Sports Car collection and the owner rarely drove it. However in the summer of 2012 the car received a fuel system overhaul as well as a fluids change, and total brake overhaul along with new tires to put the car back in order as an excellent driver worthy of showing and touring. He drove the car a few times during that summer and then placed it back in the climate controlled environment of the collection only enjoying it on occasion, until late 2013, when the mileage was reported to be 52,257, having covered only 250 miles in six years.

Cosmetically the car is in exceptional condition. The paint, in the original red, is clearly newer and consistent throughout with good depth of shine and luster. The chrome shows brightly without waves in the finish. A couple of the pieces appear original with more of a patina'd finish. All of the rubber on the car appears to be new as well. The panel fit and door gaps are all excellent to near perfect overall. The wheels are nicely finished and wrapped in fresh tires. Overall the cosmetic condition is excellent and should be considered an excellent driver that could easily be shown.

The interior condition is consistent with the exterior finish. Door jams are clean and tidy and correctly trimmed. The seats appear to be newer with hardly any use and the dash and gauges are original and in very good overall condition. The dash top is also correctly crinkle finished. The steering wheel is quite obviously original and ads a nice patina to the interior. The floors under the new mats are absolutely rust free and solid originals. The door cards are nicely presented and the new carpet is of excellent quality, worthy of a Ferrari. Window mechanisms work well as do the rest of the interior accessories. All gauges work perfectly with correct lighting. The top is newer and in excellent condition as well, with a very clear rear window.

Under the hood is a tidy engine bay that is very much consistent with the rest of the car. The engine and its surroundings are clean. Everything from the wiring, to carburetion and all related components appear very much in order and well serviced. Confirmed is the original stamping on the firewall is correct for this car as an interim built 101 Giulietta. The trunk is much like the engine bay, nicely painted throughout with a correct mat in place and no evidence of rust repair. The correct Pininfarina stamping is in the trunk as well and overall the joints and corners show that the car was never hit nor had metal work done.

The underside of the car appears very solid throughout with straight rockers, solid floors and correct and original thin metal on the front and rear valances and fenders with no bondo or filler. Everything appears correct overall with the stamping on the transmission and rear end correct for the year. The rear axle straps have been replaced. While the underside is undercoated we have poked around to ensure it is solid.

The drive of this car is fantastic! A little cold blooded at start up, much like all Alfa's, but once warm it shows excellent oil pressure and quick, peppy throttle response and good power. The clutch engages nicely as does gear selection. Brakes also feel strong under heavy braking and pull the car up in a straight line. Steering feels taught and precise, as does the suspension, giving a pleasurable and rewarding drive. It is fresh from a full service to ready the car for sale.

This is an excellent opportunity to acquire what is perhaps the best combination for a driver quality Giulietta, upgraded power, well sorted, finished in its original and ever-stylish colors. The perfect car for rallies and tours.