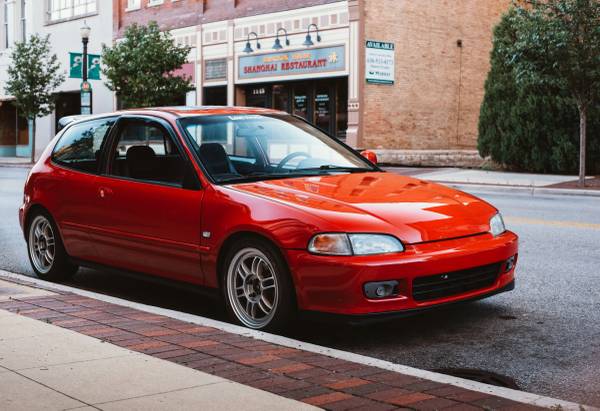 Details by owner
Looking to find a new home for my 1994 Honda Civic Si. There has been over $20,000 of parts, labor, blood, sweat, and tears put into my civic. It's a nice build but obviously won't be everyone's cup of tea. Even though a lot of money and effort was put into it, I'm hoping to get a realistic price in exchange for the new owner to take excellent care of it, just as I have.I believe I am being more than reasonable in my asking price so if I cannot come to an agreement with a buyer I will just keep it another season and try again next season.

This Civic started out in Texas. I have the original owners manual with the Texas address still written on it, and I also have receipts from its routine maintenance done at the Honda dealer in Texas. After almost 20 years in Texas it was purchased and moved to Tennessee where the build began. It has never seen rain, or snow since being completed. It's been kept under a cover, driven less than two times a year, waxed every few months, and started routinely to stay fresh.

Here are some specs:
40-45k estimated miles on the swap, 180k on body
Clean Title and Carfax (Never Wrecked)

I've personally gotten high 30s low 40s mpg on full tanks of gas when driven conservatively. It's currently set up to run safely on 87 octane. I've never pushed the motor passed 4K rpms! It's just a Sunday cruiser. Get in it and drive anywhere and enjoy 40 miles to the gallon highway! Or if you want to race it and hit vtec you'll need to swap ecu's.

Cons:
Getting picky, the steering has a little play. Still drives fine anywhere you want to go.
Needs a drivers side seat belt.

Car has been garaged since the day i bought it.
The pictures are professionally shot, and are not doctored up. The car is as clean as it looks. Pictures taken less than two months ago. If you want to see anything specifically not pictured let me know. Undercarriage is consistent with the rest of the car, undercoated from Honda, all other parts free of rust and or scaling metal. It's clean.