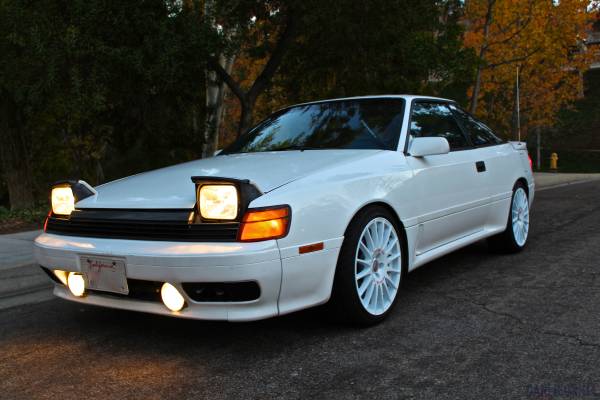 Here's fourth generation Toyota Celica commonly known as The GT4 is one of the high performance cars come with 4WD drivetrain that was offered by Toyota start from 1985 to 1989. As shown here is 1988 model fairly nice white 2-door coupe has been driven about 152500 miles looking for a new owner. the Celica is the mainstay of Toyota cars to compete in the world rally championship, could be fun to have one.

Very rare in US, the appearance look clean and neat in photos seems has good shape overall. It could be a coolest example of Toyota Celica GT4 being offered in Craigslist today described excellent condition with a few sign of use. If seriously want to kept it, you should come to see directly for accurately condition.

Details by owner
I'm selling my extremely rare and sought after Toyota Celica All Trac ST165 also know as GT-four. This was a homologation model for the Toyota World Rally Championship Car.

Resprayed five years ago - has some cracks in the bumpers, some scratches, one dent in the left rear corner.